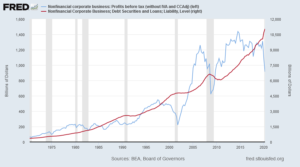 U.S. Treasury bonds (and bills and notes) are often thought of as risk-free investments.

The U.S. Treasury has always honoured its debts in dollars. BUT the purchasing power of those bonds can decline, sometimes dramatically.

This chart, from Lyn Alden, shows the historical yield of the 10-year Treasury note (blue line) along with the forward 10-year annualized inflation-adjusted return from the start of that year (orange bars): 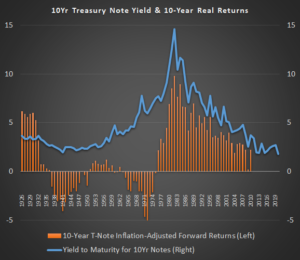 I have an associate interested in investing in the following types of ventures:

“…This is a bear market. Recovery hinges on an unlikely resolution of the US-China ‘trade dispute’.”

WASHINGTON — The Federal Reserve, which invested trillions of dollars to prop up the American economy after the 2008 financial crisis, is finally ready to take away the crutches.

The Fed …will gradually reduce its $4.2 trillion portfolio of United States Treasury debt and mortgage-backed securities, a move that would amount to a vote of confidence that the economy’s slow-but-steady growth is likely to continue.

Fed total assets of $4.5 trillion (the red line on the above chart) does not give the full picture. Of the cash injected into the economy, $2.2 trillion found its way back to the Fed by way of excess reserves deposited by banks (the blue line).  … the net effect of the balance sheet expansion is the difference between the two lines, or $2.3 trillion.

Even $2.3 trillion is a big number and any meaningful sale of securities by the Fed would contract the supply of money, tipping the economy into recession. So …the Fed does not intend to sell securities. It will simply decrease the “reinvestment of principal repayments it receives from securities held” according to its June 2017 detailed schedule …The amount withheld from reinvestment will commence at $10 billion per month ($6bn US Treasuries and $4bn MBS) and step up by $10 billion each quarter until it reaches a total of $50 billion per quarter.

That means that $100 billion will be withheld in the first year and $200 billion in each year thereafter….”so that the Federal Reserve’s securities holdings will continue to decline in a gradual and predictable manner until the Committee judges that the Federal Reserve is holding no more securities than necessary to implement monetary policy efficiently and effectively.”

…This is bound to take some of the heat out of the stock market. The plus side is it may restore some sanity to market valuations, but any sudden moves could cause an overreaction… 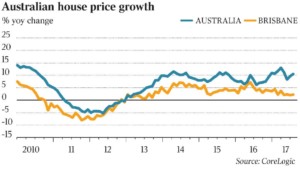 …When China’s 2015 stock market bubble popped, prevailing Western opinion held that China’s economic boom would flame out in a debt crisis comparable to America’s subprime disaster of 2008 or the near collapse of Europe’s southern tier in 2013. Now that China’s tradeable stock market has risen by 43% during 2017 in US dollar terms, Western opinion is melting up. Bridgewater, the world’s largest hedge fund, is raising money for a China investment vehicle. Bank of America now predicts Asian stocks will double in the present bull run. “Hedge Funds Used to Love Shorting China. Now, Not So Much,” declared a Bloomberg headline Sept. 12.

The same applies to Western evaluation of China’s standing as a world power. Graham Allison’s The Thucydides Trap, a plea not to oppose China’s strategic challenge to the United States… warns:

In the three and a half decades since Ronald Reagan became president, by the best measurement of economic performance, China has soared from 10 percent the size of the US to 60 percent in 2007, 100 percent in 2014, and 115 percent today. If the current trend continues, China’s economy will be a full 50 percent larger than that of the US by 2023. By 2040 it could be nearly three times as large. That would mean a China with triple America’s resources to use in influencing outcomes in international relations. Such gross economic, political, and military advantages would create a globe beyond anything American policymakers can now imagine.

Investor opinion about the Chinese stock market has only begun to change, but corporate America has been bullish on China all along. Chinese companies’ share of global electronics production, meanwhile, rose from 30% in 2012 to nearly 60% in 2016, and this share will rise to 87% by the end of the present year. China is the world’s largest market for electronic components and no American company can afford not to have a major presence there.

President’s Trump veto of a Chinese-backed purchase of Lattice Semiconductor last week drew headlines, but shouldn’t have. Lattice is a second-tier firm whose production facilities have already moved to Asia. But America’s top of the line tech companies have been selling their family jewels to China for years, as a condition of entry into the Chinese market.

To gain access to the Chinese market, American companies are being forced to transfer technology, create joint ventures, lower prices and aid homegrown players. Those efforts form the backbone of President Xi Jinping’s ambitious plan to ensure that China’s companies, military and government dominate core areas of technology like artificial intelligence and semiconductors…The worry is that by teaming up with China, American companies could be sowing the seeds of their own destruction, as well as handing over critical technology that the United States relies on for its military, space and defense programs.

Advanced Micro Devices and Hewlett Packard Enterprise are working with Chinese companies to develop server chips, creating rivals to their own product. Intel is working with the Chinese to build high-end mobile chips, in competition with Qualcomm. IBM has agreed to transfer valuable technology that could enable China to break into the lucrative mainframe banking business.

America produced every important invention in the digital age, from integrated circuits to semiconductor lasers, solar cells, flat panel displays, sensors and light-emitting diodes. Except for integrated circuits, Asia now produces virtually all the world’s output of these building-blocks of the electronics industry, and China has a crash program underway to become the world’s major producer of semiconductors….

Western analysts in general dismissed China’s trillion-dollar Belt and Road Initiative (BRI). During the past year, though, new rail lines have lined China to Iran, Turkey and from there to Western Europe, drastically reducing the time and cost of shipping across the Eurasian continent. Two rail links to Iran are now in operation.

On September 6, the first train to Teheran departed from Yinchuan, capital of northwest China’s Ningxia Hui Autonomous Region, with a 15-day journey time to Iran’s capital, half as long as sea transport. The Baku-Tbilisi-Kars railway linking China with Turkey and the South Caucasus begins operations in October. China already is Turkey’s largest source of imports.

As a result, once-neglected areas of Western China have become the most dynamic zones in the China’s economy. According to a recent study by the Milken Institute, the fastest-growing city in China is Chengdu, a metropolis of 12.3 million people in Sichuan province. Few Westerners can find Chengdu on a map, but it exemplifies the initial success of BRI.

Rail links bind Western Asia to Beijing. Chinese companies will be able to pack components into containers for assembly by low-cost Turkish labor, and further export to Europe and Africa. But the visible face of BRI may be less important than the digital revolution coming from China. China is the first emerging economy to shift from cash to digital payments, as mobile broadband reaches the outlying parts of the Chinese economy.

Companies like Alibaba and Tencent draw rural areas into a global economic marketplace. Chinese who once tilled subsistence plots or manned market stalls are turning into entrepreneurs with access to capital markets through such platforms as Jack Ma’s Ant Financial, and global sales through Alibaba.

China is transforming the economics on its periphery. This has obvious and deep strategic implications. Turkey now looks East to China rather than West to the European Community for its economic future. Iran, long dependent on Chinese trade to circumvent the Western embargo, is increasingly dependent on Chinese investment for oil and gas extraction.

American influence in Western Asia is eroding quickly. Turkey is now a NATO member in name only; it has bought Russia’s S-400 air defense system over NATO protests, and it has allied with Iran to suppress Kurdish forces in Syria whose success threatens to strengthen Kurdish independence movements in Iran as well as Turkey.

Suddenly, from the South China Sea to the Bosporus, the United States cannot move without brushing up against Chinese influence, if not outright Chinese power…

The first was an automation-software engineering project on a major WA resources project. The subcontractor was seeking the reimbursement of several hundred-thousand dollars guarantee bond being held by his client. As usual we encouraged the parties to resolve the matter by mutual consent, which they successfully did. Thus the applicant withdrew his claim and we dismissed the the matter without the need to consider the merits. This minimized the costs of the process to the parties and the impact of the dispute on their commercial relationship.

The second matter concerned a payment claim of several hundred-thousand dollars by a builder against the developer of a multi-residential construction project. The claim includes payments for contracted construction work, several variations of the scope of work, and an innovative finance facility agreed between the parties. We expect to determine the matter, in accordance with the Act, in the coming days.